A sudden realization hit us during Monday’s episode of the SportsPen.

Sam Ali from ABC 10 and I were talking about the Lions, and how the expectation was that they need to make the playoffs and win a game. Then, Sam asked me, “Who gets fired if they don’t? Does anyone?”

Well, surely someone has to be blamed, right? Someone has to go if they fall short of expectations once again. But who? 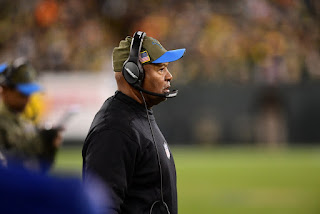 The Lions basically locked themselves into this core of coaches and players for the foreseeable future. Head coach Jim Caldwell signed a multi-year extension before the season started (but didn’t tell anyone), so firing him would cost the team millions of dollars.

Quarterback Matthew Stafford surely isn’t going anywhere after signing the richest contract in NFL history this offseason. He’s also the best quarterback in the history of the franchise, so don’t even think about it.

Can you blame offensive coordinator Jim Bob Cooter? He’s been handcuffed by one of the league’s worst rushing attacks all season. Firing Cooter would accomplish nothing when he can basically work with only half the playbook. Just weeks ago he was the darling of the NFL and some even whispered his name among those poised to become head coaches in the very near future. Now those same people blame his playcalling for the Lions’ first-half woes.

What about defensive coordinator Teryl Austin? Nope. His defense has been decimated with injuries to the defensive line and linebackers, so the blame shouldn’t fall on the scheme. Austin’s name perennially comes up during hiring season in the NFL, and is again linked to another head coaching job, this time with Arizona State. No one blames Austin.

General manager Bob Quinn is only in his second season with the team, far too short a time-frame to judge his performance.

Quinn’s strategy from day one has been to make a series of smaller moves to steadily improve the overall roster instead of overhauling it overnight. He has signed three higher-tier players in wide receiver Marvin Jones and offensive linemen TJ Lang and Rick Wagner, but overall his signings have been fairly conservative.

His drafting has been graded highly thus far. According to my non-scientific opinion, 10 out of 19 of Quinn’s draft picks have made some kind of impact, and two more could in the future but have been held back by injuries.

Quinn has not been blamed for much of anything in his tenure, but one glaring error that falls squarely on his shoulders is the running game. Anyone who has watched the Lions the last four years knew the run game needed to be improved. Sign someone. Draft someone. Do something! Quinn did nothing, and now the Lions have the 30th-ranked rushing offense. Eight rookie running backs are averaging more yards per carry than Ameer Abdullah. This is the year of the rookie running back and the Lions missed out, because of Bob Quinn.

Is this a fireable offense? Not yet. The overall depth of the roster has improved and the drafting has improved. For now, Quinn is safe.

One thing to keep in mind as well is that the season isn’t even over yet, even though this sounds more like a postmortem on another failure. Detroit has five games remaining, four of them against opponents with a losing record. At 6-5, they’d need to go at least 4-1 to have a shot at making the playoffs. That’s doable. But that’s only part of the equation.

All of this leads me back to my original question. What happens if the Lions fall short of those expectations, as Sam Ali expects them to? Who is gone? Stafford? Caldwell? Cooter? Austin? Quinn?

Nothing of significance will happen. No one of importance will be fired or let go.

They might fire some assistants and not re-sign a couple guys, but for the most part everything will remain the same. This means either the Lions finally have some stability in their organization, or it’s just the Same Old Lions. Only time, and results, will tell us which.